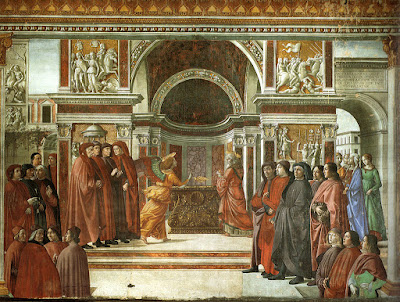 
Picture this scenario:  a few hundred years have gone by since Isaiah's prophesy about the coming Messiah, and Israel is still waiting. One day in the Temple in Jerusalem, one of the priests, Zacharias, is chosen by lot to burn incense before the Lord on the golden Altar of Incense, which stood at the doorway to the Holy of Holies.

While busy about his work, suddenly the angel Gabriel appears to him with an astonishing message from God. (There were a lot of angels in the Christmas story.) God was going to give Zacharias and his aged wife a son in answer to a long-time prayer, a baby boy they were to call John (which means "the Lord has shown favor").  John would be a prophet whose job would be to help prepare the hearts of God's people for the soon-to-appear Messiah.

Prepare their hearts?  Why?

Well, hundreds of years with no prophetic messages from God and a history of national subjugation to foreign powers had dulled their zeal for their God. Sin, darkness, and unbelief had crept in.  (Sound familiar?)  A hard heart is like hard soil--it can't receive seed or water to nourish it.

So Zacharias, responding like perhaps many of us might have, said, "What?!  I'm too old for that! (Ahem. As a priest, he would have been well aware of the story of Abraham, their forefather, who had a miracle son at 100 years old.) Gabriel replies, "Okay, because you didn't believe me, you'll not be able to speak until the day this comes true--and it will come true."

And of course it did. Zacharias had to write notes and use sign language for many months to communicate. But in that silent time, he had a chance to prepare his own heart. I imagine he searched the Scriptures to see if this could be true, and you know what he might have found? The last message from God to Israel four hundred years earlier promised that God would send a prophet to "prepare the hearts of the people" (Malachi 4:5-6).

Those long months Zacharias had to ponder did their work in his heart. Little John was born and Zacharias' tongue was loosed. But instead of fear and unbelief, now the words poured out of his mouth in a prophetic song of praise. His first words were of the Messiah:


"Blessed is the Lord God of Israel,
for He has visited and redeemed His people...
as He spoke by the mouth of His holy prophets
who have been since the world began...
To grant us that we, being delivered from the
hand of our enemies, might serve Him without fear,
in holiness and righteousness
before Him all the days of our lives...
To give light to those who sit in darkness and the shadow of death
to guide our feet into the way of peace."
~ from Luke 1:67-79

Not many months later in a town not far away, John's cousin Jesus was born, another miracle baby.  But this one, The One, was He whom John would one day say, "He is preferred before me, whose sandal I am not worthy to loose." (John 1:27)

Just think--we don't have to wait like Zacharias did or Israel did. We can prepare our hearts right now--open them in fresh humility and thankfulness for God's incredible gift of salvation, our Jesus. 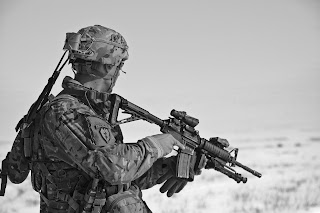